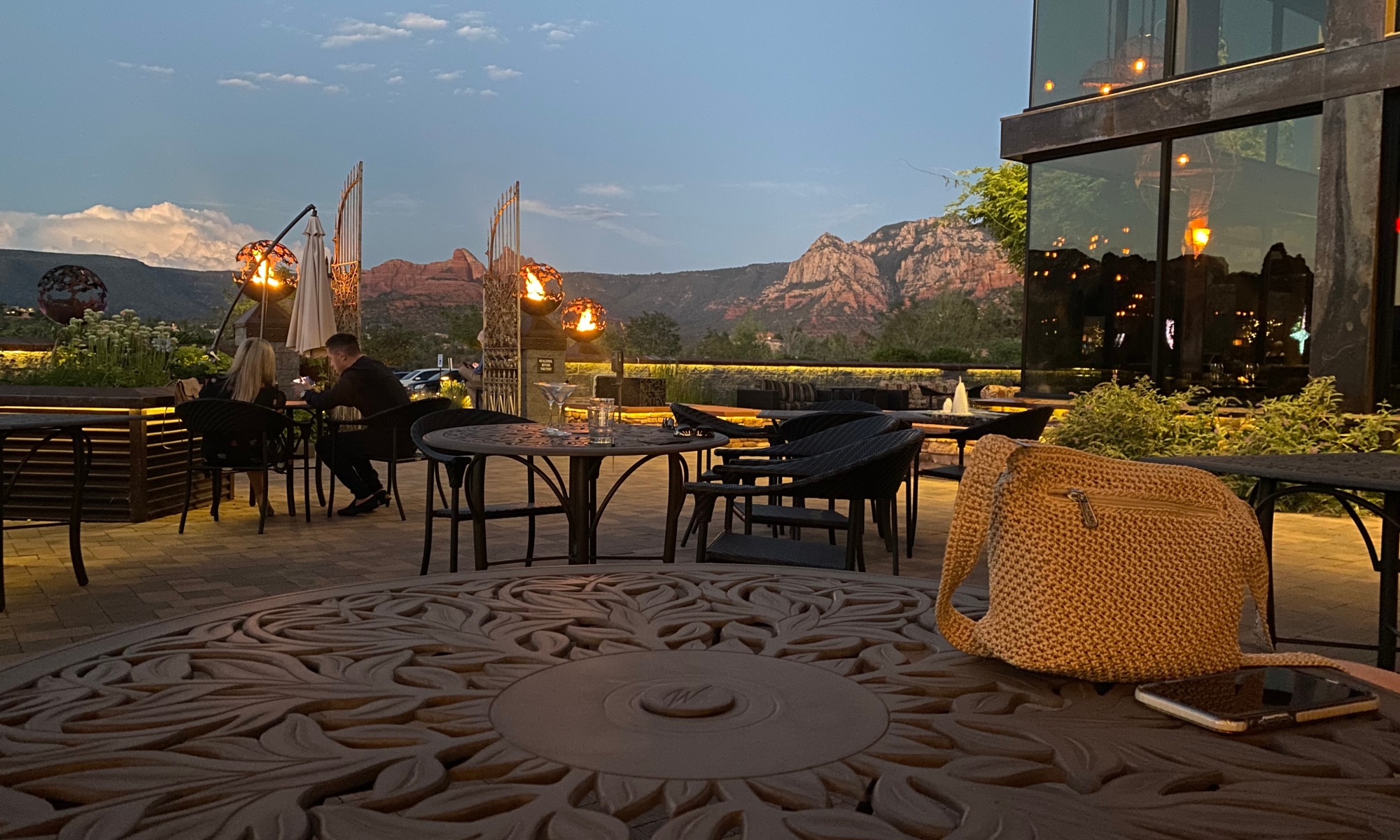 You’re likely going to be coming in from Phoenix from the south via I-17. It’s a straight shot until you get to exit 298 which puts you on state highway 179, aptly called the Red Rock Scenic Byway. After spending the previous hour and a half plus going over flat desert, you are transported to a land of massive , rustic red mountains. Bell Rock is the first, very-distinguishable landmark you drive towards, circling to the left of with a few spots to stop if you wanted to.

Sedona is essentially a ‘T’, with highway 179 running up into 89A which runs west towards the rest of the town or north towards Flagstaff. The town itself has a population of only 10,000, so the traffic is light but there are plenty of convenience options available (we stocked up at Whole Foods since our resort room had a kitchen.)

There are plenty of options to stay in Sedona, from inexpensive motels and hotels in West Sedona or nearby Village of Oak Creek to higher end resorts in Uptown. If your wallet is feeling too full, you can splurge on stays at Enchantment Resort or L’Auberge. We stayed at Los Abrigados Resort and Spa which had a great location and plenty of amenities.

We stayed during the middle of the week in August. Both of these factors benefited us as Sedona is often a weekend getaway destination for those living in Phoenix and most people don’t want to visit the desert in the hottest month. This let prices stay (relatively) down and there was no crowd. For the first two days at the resort, I don’t think we saw anyone even close to our age demographic.

Los Abrigados is decently sized, with 196 accommodations on the property ranging from studios to full houses. Our room was 610sqft including a living room, dining room, kitchenette that was equipped enough to make several breakfasts, lunches, and dinners, a big balcony without much a of a view, and a king-sized bed.

Around the property, you can find quite a few amenities:

Overall, I would definitely consider staying at Los Abrigados again the next time I’m in Sedona, but I would also be up for checking out other accommodations too. It was a good experience, the hospitality was great, but nothing jumped out as “must come back.”

The main thing we wanted to do in Sedona was spend time in nature, taking in the beautiful scenery. Check out one of my last posts on our two favorite hikes in the area.

There’s plenty of other things to get into if walking in the sun isn’t your thing, or you want something more accessible.

The area is known for the presence of vortices, meaning there are plenty of yoga and healing classes. We found there were sessions available for every level of client, too, from first-timers to those who are very in touch with their spiritual selves.

Arizona isn’t the first place you think of when it comes to great wine regions, but its Verde Valley is quickly evolving into a destination for wine-lovers, especially those who like warm-weather grapes such as Merlot and Chardonnay. You can even download your own passport and collect stamps at the surrounding vineyards.

Our resort was right next door to Tlaquepaque, an arts and shopping district that we were super excited about. Unfortunately, our admiration for the concept of this place quickly evaporated once we started browsing the shops. Whitewashed and pretentious, we were snubbed aside by every shopkeeper that we encountered (the girls that ran the global spirits store were very nice, however). Even the two people running the Chai Spot were reluctant to make us drinks from scratch instead of using their premade vat of their most popular drink. Sorry, but I need Stevia instead of cane sugar. The concept was there, but I was definitely expecting a local-artist feel rather than what it actually was.

Honestly, just driving is incredible. The views you get on the main streets are ridiculously beautiful. We admired how the mountains awoke for sunrise and how their silhouettes tucked into the darkness at night. It was a scene that I would never grow tired of.

Our final night, we went out for dinner to celebrate Rachel’s birthday. We made reservations for Mariposa, a latin-inspired restaurant run by Chef Lisa Dahl. Somehow, we lucked into patio seats at prime-dinner time, but just past when sunset was supposed to occur. So, beforehand, we drove up to the local airport which sat atop a mesa and drove back down when the sun began to set. When I say the view was magical, I’m not kidding. You can also pay to park at the top of the mesa, but you will run into a very large crowd. After we took in the scene, we pulled into the Mariposa parking lot and were allowed to sit in the entrance patio section and indulge in some tasty drinks.

Moving to our seats, we admired the hefty front door which Chef Dahl documents on her Instagram page. We were treated to delicious servings of grilled octopus legs, Chilean seabass, and wood roasted mushrooms. For dessert, they gave us a few healthy scoops of gelato with some customized chocolate pieces that read out “Happy Birthday” and we split a Boca de Muerto which was a rich, flourless chocolate torte made with Grand Marnier and Chimayo chili. I say split, but I ended up eating more than my fair share of the plates. The crazy thing is, my blood-glucose was essentially unaffected. I stayed an even 95 mg/dL with no bolus, which I am now attributing to drinking copious amounts of wine and water.

On the way out of town, we took a slight detour to stop by one of the most famous landmarks in the area – the Chapel of the Holy Cross. Completed in 1956, the church is built around the red rocks, high atop a cliff. It’s a very good looking building and open to the public; however, we didn’t get a chance to stop by because it didn’t open until 9am and we had to be back in Phoenix for an early morning flight. This was constructed by Marguerite Brunswig Staude, who was a student of Frank Lloyd Wright. I now feel obligated to see one of his works, as we had also passed up the chance to see his Fallingwater house in Ohiopyle.

Sedona is beautiful and though I would make some changes to our next visit, I fully intend on coming back to see more of the desert and finish more of the rewarding hikes that we didn’t get to this time.