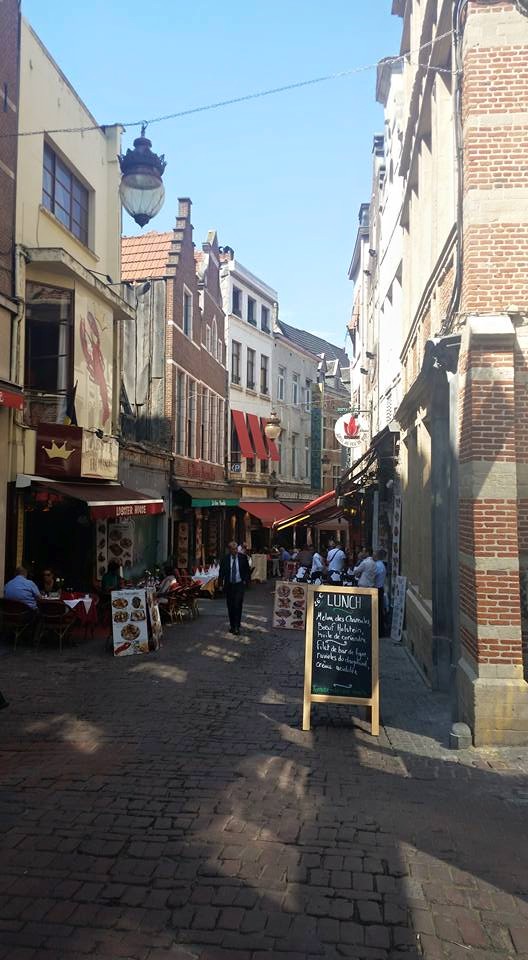 I stopped in Belgium for a brief layover between Paris and Rome. It should have been a forgettable few hours where I could find enough time to grab a bite to eat and relax before the second leg of our flight. But Brussels had a different plan for me.

When we arrived at the airport, we began our layover by getting on the wrong train (heading in the opposite direction towards Luxembourg.) The layover ended by finding out my luggage had been lost once we returned for the second flight to Rome. This should have been a bad experience, but it just wasn’t.

We realized, rather quickly, that our train was going in the wrong direction and made the switch at the next station to head back into the city center. Once at the Central Station, we headed down a hill towards a pedestrian-only walkway. We had no plans here. We didn’t look up “Top Things To Do In Brussels” or have any recommendations of where to go and what to see. That ended up being the best part.

The cobblestone alley we stumbled upon was what I had imagined Europe to look like. It was busy, intimidating, and foreign. You couldn’t tell where one restaurant or shop ended and the next one began. While one host is pointing you towards their menu exclaiming how its in English, you have a host across the alley beckoning for you to look at their high-quality dish pictures, all while avoiding the never-ending sea of tourists walking through you as if you didn’t exist. In other words, it was exactly what I wanted.

We found a tourist-facing restaurant to sit down for a meal, but they had €10 specials that included an entrée, frites, and a beer. It was a lot of food, too, so our bellies left happy. Our next stop were the Saint Hubert Galleries’ to window-shop some chocolates and Smurf memorabilia.

The trip was short, unplanned, and uneventful, but it left me craving more of the maze-like corridors and small, family owned shops that I romanticized about Europe having. I look forward to visiting again in the future for an extended stay, maybe with a trip out to Bruges or Ghent.